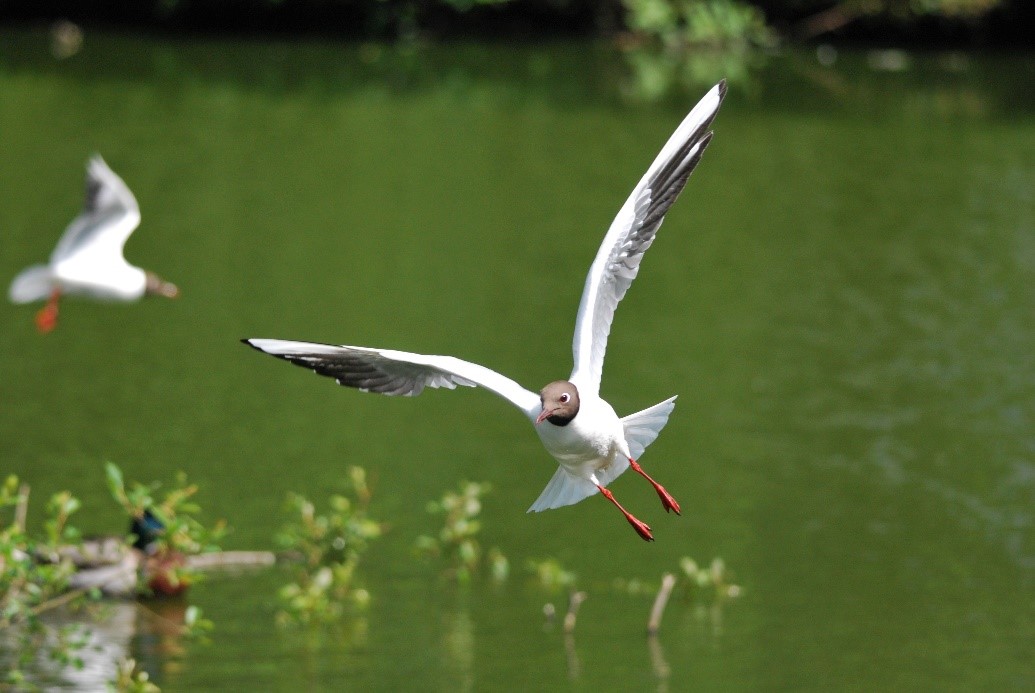 The Black Headed Gull is a common sight throughout Northern Ireland. Like other gull species, it is an opportunistic feeder with a varied diet consisting of insects, plant matter and fish. It will also readily scavenge human scraps which accounts for its presence in urban areas and gardens. Although Black Headed Gulls are a familiar sight to many of us, the species has suffered declines in its breeding population and it is now a priority species in Northern Ireland.

Inaccurately named, it actually has a chocolate brown coloured head during the summer months and a white head with a dark ear mark in winter. Juveniles are beautifully patterned ginger and brown with a black tail band. Another distinguishing feature to look for in adult birds is red legs and a thin red bill.

Black Headed Gulls can be easily confused with the Mediterranean Gull- a rare summer breeder. The BTO have an excellent ID video to help you differentiate between hooded gulls and can be viewed here.

The Black Headed Gull is a gregarious species, hanging out in large groups in winter and a colonial nester. The Northern Ireland population increases in winter with migrants from the continent. The small islands on Lough Neagh are an important resource for breeding Black Headed Gulls. Typically nests are built on the ground and are comprised of dry grass and other vegetation. An average of 2-3 eggs are laid and the young birds fledge around 34 days old.

If you have an interest in gulls and other “waterbird” species, you can make your birdwatching really count by taking part in the BTO’s Wetland Bird Surveys (WeBS). You can do monthly counts at your own dedicated site, your data will help in the monitoring of our wetland species. For more information you can contact BTO NI Officer Stephen Hewitt on stephen.hewitt@bto.org.