In the heart of Northern Ireland you will find Lough Neagh, the largest lake in Britain & Ireland.

Lough Neagh captivates visitors with its tranquil atmosphere, un-spoilt scenery, secluded bays and skyward views. Lough Neagh is a haven for wildlife with many viewpoints around the shoreline.

There is so much to see and do from history and heritage, visitor attractions and crafts to land and water based activities. Boating on Lough Neagh is now accessible to all with two secluded islands steeped in history, flora and fauna……..paradise just waiting to be discovered!

Lough Neagh & Its Waterways is a Land of Myths and Legends where tales abound of giants, underwater cities and Celtic gods. Uncover the ancient past, see internationally recognised wetlands and incredible wildlife, and enjoy the many leisure activities around the Lough.

Lough Neagh is the largest freshwater lake in the UK and Ireland, it contains over 800 billion gallons of water.  Lough Neagh has a unique and diverse habitat with many rare species of plants, bugs, waterfowl, birds and fish.  It has been designated a Ramsar Site – this is an internationally recognised treaty for the conservation of wetlands.

Its remarkable flora and fauna mean it is also an Area of Special Scientific Interest (ASSI) and a Special Protected Area. The woodlands, bogs, meadows, rivers and reedbeds all provide a wonderful home for its inhabitants.

But it isn’t just the wildlife and the beauty of the landscape that make Lough Neagh so unique. It is also the colourful myths and legends told about this historic place by the ancient storytellers who found it as fascinating as we do.

Lough Neagh is said to have its very own Atlantis? According to myth the people of one of the kingdoms of ancient Ireland had a magical spring of freshwater.  When the people became greedy the spring rose up and flooded the kingdom, leaving an underwater city beneath the waves of Lough Neagh.

How was Lough Neagh formed?

The most colourful explanation for the creation of Lough Neagh involves Northern Ireland’s most famous giant – Finn McCool. The story goes that Finn was chasing his Scottish rival Benandonar from these shores, scooped up a massive clod of earth and flung it at the retreating giant. Finn didn’t know his own strength and threw too far and the earth and rocks landed in the middle of the Irish Sea forming the Isle of Man. According to legend, the hole in the earth then filled up with water forming Lough Neagh.

But scientists have another explanation for how the earth was moved. Below the Lough there are fault lines in the earth’s crust. Around 65 million years ago there was widespread volcanic activity and movement in the fault lines created a large basin, which filled with water, becoming Lough Neagh.

Did you know that six main rivers run into Lough Neagh but only one flows out? The River Maine, Six Mile Water, Upper Bann, Blackwater, Ballinderry, and Moyola all flow in before flowing out via the Lower Bann into the Atlantic Ocean.

Considering its immense size, Lough Neagh is relatively shallow with an average depth of 8.9 metres. The deepest part is in the North West of the Lough near Toome Bay where an area called the Trench is 34m deep (that’s more than 111 feet!).

The water temperature ranges from 3–16 °C depending on the season and weather conditions. Lough Neagh rarely freezes over completely though on several occasions in the 1800s winters were so cold that people had skating parties and held barbeques on the ice.

Pieces of fossilised or petrified wood – called Lough Neagh hones – sometimes wash up on the shores of the Lough giving rise to an ancient belief that the lough could petrify things. There is a rhyme – “Lough Neagh hones, Lough Neagh hones, you put in sticks and take out stones” – that tells of this old belief.

The History of Lough Neagh

People have lived near Lough Neagh for thousands of years –archaeologists believe that some of the first humans in Ireland lived on these shores and have found artefacts dating back to the Mesolithic period (8000–4500 BC).

With this long history, Lough Neagh has inspired many stories as people speculated about this immense body of water and the powers it holds as a source of fresh water and food.

The name of ‘Lough Neagh’ comes from the ancient Irish Loch nEachach or Eochu’s Lough, which means ‘horseman’ or ‘horse god’! During the Plantation period attempts were made to change the name to ‘Lough Sydney’ and ‘Lough Chichester’ but local people never adopted the new names and it remains Lough Neagh to this day.

Lough Neagh is home to the largest wild eel fishery in Europe with the majority of the eels exported to Holland, Germany and London annually. These eels begin life in the Sargasso Sea up to 4000 miles away and journey along the Gulf Stream following the North Atlantic Drift to Ireland. They reach the Lower Bann and swim upstream to Lough Neagh where they feed and grow until they are ready to return home to breed.

Two types of eels are caught on the Lough – the younger yellow eel and the mature silver eel. They can grow up to 40cm and weigh as much as 600g. Fishermen continue to fish using methods passed down from earlier generations. The Lough Neagh Eel has been granted special PGI status putting it in the same category as other world class foods such as the Parma Ham or Champagne.

Eel fishing on Lough Neagh is believed to date back to the Bronze Age and it is thought that the first commercial eel fishery was located near Toomebridge around 2,000BC!

Commerce plays an important role in the life of the people on the Lough and sand extraction is the largest industry today. Sand taken from Lough Neagh is used to make glass, tiles and concrete – it was even used to build Croke Park Stadium in Dublin and is also in the mortar at Stormont where the Northern Ireland Assembly sits.

Records show that sand extraction was carried out as far back as the 1600s. Sand was in such high demand after World War II that there were not enough barges to carry it away so a fleet of decommissioned Guinness barges was refitted for sand extraction!

Rams Island is a very special place – a home for medieval monks, playground of the aristocracy, a spectacular nature habitat, a favourite picnic spot for American GI’s during World War II and a place of mystery and magic where tales of faeries and mermaids abound.

The largest of Lough Neagh’s islands, Ram’s Island is one mile long and 40 acres in area. Its most prominent feature is the ancient round tower, where residents of its monastic settlement retreated at the sight of approaching would-be raiders.

Ram’s Island was bought by the O’Neill family of Shanes Castle in 1804 and transformed into a landscaped garden paradise full of exotic trees. The family built a fashionable summer home and entertained visiting gentry in this beautiful and isolated spot. You can still see the ruin nestled under the shadow of the round tower.

A hundred metres or so to the north of the O’Neill home is the scant remains of a once picture postcard thatched cottage, which was occupied for 50 years by caretaker John Cardwell and his wife Jane. The pair lived a near self-sufficient existence, keeping chickens, making butter and feasting on wild rabbit and duck.

During World War II, off duty soldiers stationed at bases such as nearby Langford Lodge were drawn by the beauty of Ram’s Island and many of their names are clearly visible carved in the trees.

The island is a haven for wildlife. Its residents include five different types of bats, shelducks and a sizeable population of herons with their large nests clearly visible in the tall trees.

Coney Island is 1km off shore from Maghery Country Park, this island is an exciting destination to be explored. The island has a rich history spanning many centuries, with evidence of human occupation dating back 8000 years BC. One of the most westerly outposts of the Normans during their occupation of Ireland from 12th Century. The island has its very own resident warden who lives in a quaint cottage on the island throughout the year.

Why not come and explore the Lough Neagh & Its Waterways for yourself! 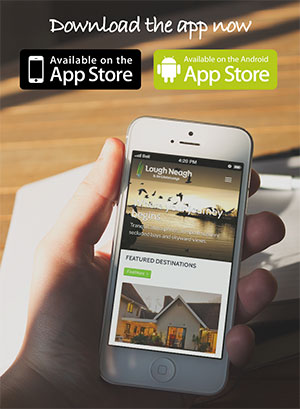